March 14, 2016
Most years in spring the countries of north-western Europe undertake a combined survey (Blue Whiting Acoustic Survey - Blog here) to asses the spawning grounds of blue whiting. This is done both to monitor the population, but also to help estimate the next season's quota. The survey has its own blog explaining all this in detail here.
The fish is not often used directly for human consumption, but rather is used for oils and fish meal for the industry (essentially a protein and fat source).
The survey uses sonar to estimate the amount of spawning that primarily occurs close to the continental shelf edge south west of Ireland. the spawning moves northwards as spring proceeds, and to cover the whole area we travel a total of 2500 nautical miles (4600 km). Because the area to cover is so huge (and likely because of some politics) multiple countries are involved in surveying the whole area, leading to the coverage seen in the picture below. 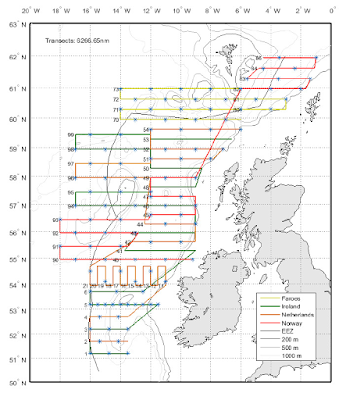 Travelling this far is costly, and the ship's personnel undertakes a good portion of other tasks besides the blue whiting survey. Among these is a big sea-bird survey by Birdwatch Ireland, sampling of fish species by DTU-Aqua and FEAS and marine mammal survey by GMIT and IWDG
Rasmus from dBSea/GMIT will be away from his usual duties and be on the ship during the three weeks the survey lasts. He will be the Passive Acoustic Monitoring capacity on board. dBSea is exited to be part of this survey and the lessons we can learn from more time in the field, with experts from IWDG and GMIT.

We have been told that there should be some internet aboard the ship, and Rasmus will try and keep us updated if possible.