A side on view - the transect

For detailed investigation of the effects of changing model parameters

The transect can often provide a good way of understanding and illustrating the effect of changing parameters in your model.

The effects of underwater walls/banks can be hard to predict, I have tried to demonstrate the usefulness of an array of transects used to visualise the effect of adding a sand bank as noise mitigation (Figure 3). while the "wall" I've added look impossibly steep, this is an artefact of fitting the scenario to the screen, Figure 2 has a better scaled transect example (10 m deep, 150 m long).

The effects of a wall is unlikely to be the same for all frequencies, so to get a feel for the effect of the wall I've modelled for different frequencies, with and without the wall. Some interesting sound patterns emerge!
I expected low frequencies to be blocked less than higher ones, this we generally do see. I was curious about the very high transmission losses at 12.5 and 32 Hz, as these two outputs go against that trend.
This is likely because of the way that dBseaRay interacts with the seabed (through reflections calculated from seabed composition).
Very low frequencies will tend to propagate well into the sediment, and thus not propagate as much in the water phase. From the literature we expect there to be a lower frequency limit for sound propagation, below which the the environment works like a highpass filter (See Figure 4).
For this scenario the above equation yields an 'fo' og 90 Hz, meaning that we should expect to see frequencies lower than this appear as if passed through a highpass filter. For the transects without the wall, this seems to work well with the results, all frequencies under 90 (63, 32 & 12.5) are attenuated.
The curious noise pattern at 32 and 64 Hz I put down to some refracting effect of the wall.
All I really wanted to do was to illustrate the usefulness of transects and I'm currently happy to have that oddity unexplained.

Last point I wish to make is concerned with getting your transects looking nice.

In the above transects I have set dBSea to calculate only 1 radial slice (in "Setup Project"), but have set the resolution for the other setting very high! (the max resolution of the transect image is given by "x" and "z" values) 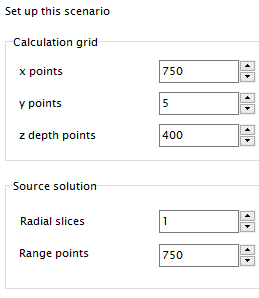