April 01, 2016
As promised in our earlier blog post, Rasmus would give us some update as to what was happening on the Blue Whiting Acoustic Survey 2016.
He got the opportunity to get the added experience of doing surveys, experience we can hopefully turn into new useful features in dBSea, this we could not say no to.

The survey is carried out on the vessel R/V Celtic Explorer, leaving from Cork March 17, and back in Galway around April 8. The route will take our man well off the coast of Ireland into the North Atlantic proper. The ship runs its own blog (scientists@sea), that not only provides updates, but also explains all the current projects in detail by the scientists themselves - it's a good read. 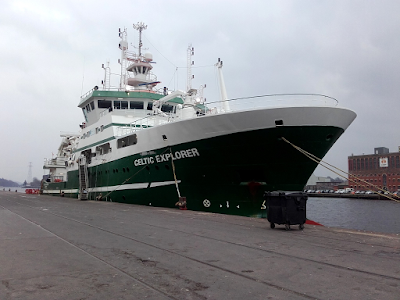 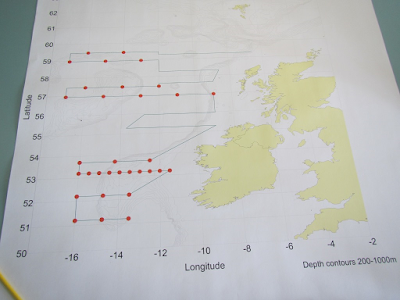 Rasmus will be responsible for the passive acoustic monitoring (PAM) during the survey. It is part of the Marine Institutes effort to map noise levels and whale and dolphin presence in the North-east Atlantic. The PAM-equipment is basically a long cable towed behind the vessel with four hydrophones in it. Two computers are set up to record all sound, and a team of marine mammal observers and bird observers work together to verify recordings against visual observations of the animals. 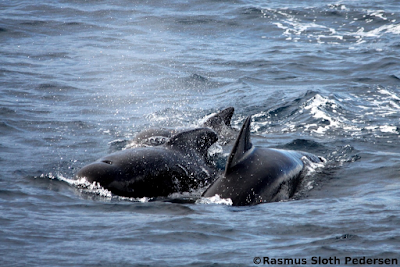 One of the most common sights on the expedition is pilot whale, they hunt around the shelf edges where the food is more abundant, due to the up-welling of nutrient rich water from the depth. These whales produce whistles that are audible to humans, and could readily be heard by the operator of the PAM-equipment. They are also often curious, and the above pictures were taken on an occasion where the whales came up close to check out the cables pulling the trawl. 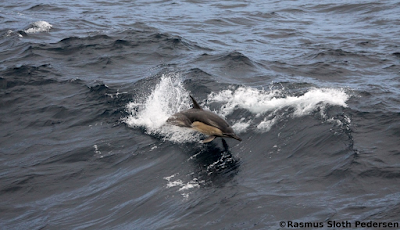 Other welcome sightings were the common dolphins that have come up to bow ride on multiple occasions. They also whistle, but use higher frequencies than pilot whales, and this can be a good clue for the observer in what to lookout for. The common dolphins are quite abundant around the south-western part of Ireland, and are often seen from boats not far off the coast.

Rossa Meade from GMIT is responsible for the ObserveAcoustic programme (blog here). The program has seen the deployment of many passive listening devices in Irish waters, where they sit anchored to the bottom recording for months. The data collected from this also helps form a picture of the noise in the Irish waters, information essential to our management of our marine resources. 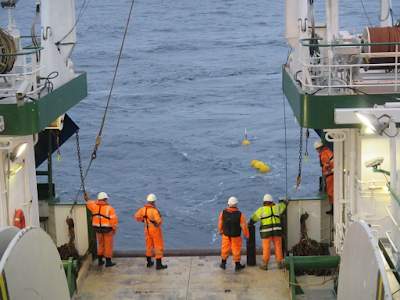 Leaving the water, there has been ample opportunity to have a look at the birds at sea, most of which are usually hard to get close to from land. Out at sea they're present in huge numbers in the areas around the shelf edge, for the same reason the dolphins and pilot whales like to hang out there. It's where the food is. 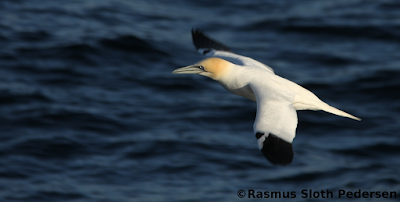 The gannet, for fishermen an iconic bird, present everytime they bring in the nets. They can be seen off the coast of Ireland making impressive 100 km/h dives to catch the fish in surprise attacks. These birds follow the Celtic Explorer for days in the hope of an easy meal after the vessel finished a trawl. Almost a pity the birds did not know the vessel is no ordinary fishing boat, so there is days between catches (that are only for sampling, so in small amounts). 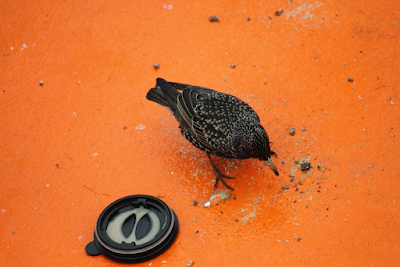 This fellow, the starling, was a more unusual visitor to the ship. they land on boat during their migration for a well earned rest. They are usually quite dehydrated and are just looking for water before they head on, but this guy (or girl) also seemed to enjoy a bit of our triple-choc cookie!
Also on the boat was chiff chaff, meadow pipit, redwing, blackbird and oystercatcher!

That is all from the high seas - back on land from the end of next week, looking forward to an office that does not move about with the waves!
Stories