During the writing of my last blog post I used a rather big base map (The Baltic Sea) and thus I had to zoom a lot to get down to the inner waters of Denmark. As you can see from the picture, the model output is not super detailed. This is a consequence of the way the program calculates the soundscape.
The program assumes that I only import the area of interest, and thus it calculates levels for the whole of the Baltic Sea (recall that I had zoomed in a lot). This in turn means that the calculation points (which spread radially from the source) will be spread all over the map. As the ferry from last blog post was not loud enough to be heard in Finland it really was irrelevant to calculate points for the whole map (I should have imported a smaller map I suppose).
But I want the detail in the small area and the overview when zooming out again!
The way to do this is to crop your area down to the area of interest, then do the modelling on that, and then combine the two pictures again. This allows detailed output on a big map. 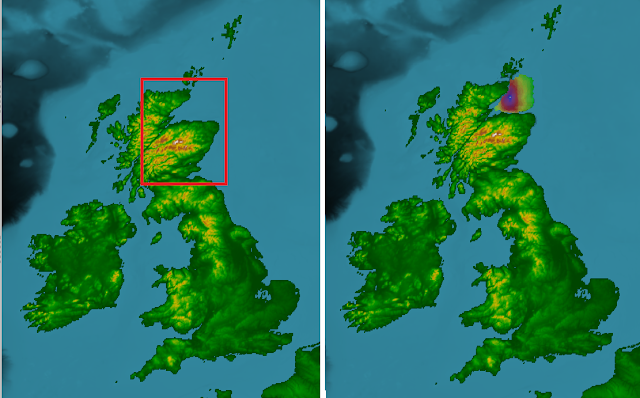 Admittedly, it is a bit of a cut and paste method, but really not very hard to do and you get detail and overview in the same picture.

The modelled sound is a pile driving at one of the oil platforms in Moray Firth, Scotland, weighted according to the hearing of harbour seals. Colours correspond to dB above the seal's hearing thresholds. So a given harbour seal will hear the pile driving at levels corresponding to the colours (provided its hearing is similar to the ones used in the audiogram I used). So really, the pile driving here does not disturb the seals outside the bay.
By doing this cut and paste on a big map we can see the whole thing in perspective but still retain detail for individual sources. This comes in handy if you add more sources to the scenario.

In the scenario below the effects of dredging in the channel leading into Sumburgh harbour on Shetland Islands is added to the map. This noise is weighted for plaice (yes they can hear), and because of the low frequency components of the noise, it spreads far into the North Sea. 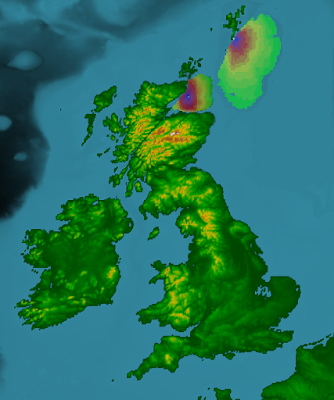 One can imagine adding many more sources this way, and produce very nice looking maps indeed, for whatever species or noise scenario.